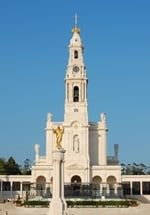 Sample Itinerary Based on a 3 night Trip

Day 1 – Arrive Fatima
Check in at Dublin airport for our flight to Lisbon. On arrival in Lisbon we will be met by our guide and escorted to the coach for our transfer to Fatima where we will check in to our hotel on a full board basis. Depending on our time of arrival, we will receive a light snack or dinner before settling into our rooms.

Day 2 – Aljustrel
The coach will pick us up at the hotel directly after breakfast for our morning trip to Valinhos and Aljustrel. Our first stop will be Valinhos where Our Lady appeared on the 19th August in 1917. Our Lady appeared to the children here as they had been taken in for questioning by the authorities on the 13th and were not at the Cova D’Iria. After praying at this very special place we will walk to the Cabeco where the angel appeared to them the first and third of the three times he appeared in 1916. We then proceed to Aljustrel, the village where the three little shepherds were born. We visit their homes and the well at the bottom of Lucia’s garden where the angel appeared the second time. Our last stop before we return to the hotel will be the Fatima parish church. There we will see the baptismal font where all three were baptised. Return to the hotel for lunch. In the afternoon attend holy Mass in the Capelinha (apparition site) after which there will be an introductory tour of the sanctuary and see the Capelinha, the Rosary Basilica and tombs of the Seers, Statue of the Sacred Heart and water fountain, candle area, Berlin Wall, Chapel of Adoration, Reconciliation Chapel and Basilica of the Holy Trinity. We return to our hotel for dinner followed by the Rosary and Candlelight procession.

Day 3 – Hungarian Way of the Cross
This morning after breakfast we will depart the hotel on foot to walk the Hungarian Way of the Cross (a gift from the Hungarian People). As we walk through the olive groves on the path that Francisco, Jacinta and Lucia would have taken many times on their way to the Cova D’Iria, we pray the stations of the cross. We finish at the beautiful little chapel of St. Stephen where we can celebrate holy Mass and climb the steps to the calvary on the roof of the chapel from where there is a beautiful view taking in Aljustrel, Fatima parish church and the Rosary Basilica. Return to the hotel for lunch. After lunch spend some time strolling around a museum or exhibition or return to the village of Aljustrel by tourist train for some relaxation. Dinner at the Hotel followed by evening rosary and candlelight procession.

Day 4 – Depart Fatima
This morning after breakfast we have some free time to reflect on our pilgrimage and revisit some of our favourite sites. We return to the hotel for lunch. In the afternoon we depart the hotel and take a coach transfer to Lisbon. In the suburb of Lumiar in Lisbon we will stop at the church of St. John the Baptist where we will visit the reliquary which houses the skull of our own dear St. Brigid and celebrate holy Mass before proceeding to the airport for our return flight to Dublin.