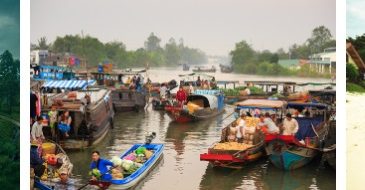 Sightseeing in Hanoi with Electric car (possible to make some stops en route)
Capital of Vietnam, HANOI is a blend of long established traditions and modern imprints of Western colonization. Tree-lined boulevards and colonial buildings give the city a touch of Western elegance, while crowded blocks of tiny old houses and narrow lanes full of daily life bear the charms of the past centuries. Drive around to visit: HOAN KIE LAKE, also known as Sword Lake, a natural freshwater lake in the city. Before the lake was named Luc Thuy (because water is green all year round). QUAN SU PAGODA which locates in 73 Quan Su, Hoan Kiem, Hanoi City. The Pagoda was built in the 15th century in An Tap hamlet, Co Vu ward, Tien Nghiem village (later renamed Vinh Xuong village), Tho Xuong district. Formerly, it was a small Buddhist Pagoda, which had been constructed during the Lê Dynasty in the 15th century to receive foreign envoys and ambassadors. SILK ROAD
Crowded and full of colors, Hang Gai street is known as the “Silk street” of Hanoi with shops selling silk products close together, to create a definition specific to Hanoi streets. HANOI RAILWAY STATION
previously called Hang Co station built by the French in 1902 and inaugurated. HOA LO PRISON, more popularly known as the “Hanoi Hilton”, is a museum near the French Quarter of Hanoi, Vietnam. It was first built in the late 1890s by Vietnam’s French colonizers as a central prison (Maison Centrale) for Vietnamese criminals. As mastery of north Vietnam passed over from the French to the Japanese to the Vietnamese Communists, the prisoners changed as well
Vietnamese Communists imprisoned by the fearful French authorities gave way to American prisoners of war and Vietnamese prisoners of conscience. TEH HANOI OPERA HOUSE was erected by the French colonial administration between 1901 and 1911. The Hanoi Opera House is renowned for its unique architecture and good composition. It is furnished rationally and harmoniously. Since its establishment, the Hanoi Opera House is the largest theater in Vietnam.
Visit Hoan Kiem Lake, Ngoc Son Temple and the Rising Sun bridge
HOAN KIEM LAKE: Hoan Kiem means Lake of the Returned, which is a lake in the historical centre of Hanoi capital. The lake is one of the major scenic spots in the city and serves as a focal point for its public life. Legend has it that King Le Loi handed a magic sword called Heaven’s Will which brought him victory in his revolt against the Chinese Ming dynasty back to the Golden Turtle God in the lake. The Tortoise Tower (Thap Rua)standing on a small island near the centre of lake is linked to the legend. NGOC SON TEMPLE: The temple was erected in the 18th century. It honours the 13th -century military leader Tran Hung Dao who distinguished himself in the fight against the Yuan – Mongol invaders, Van Xuong, a scholar and Nguyen Van Sieu, a Confucian master and famous writer in charge of repairs made to the temple in 1864. Jade Island is connected to the shore by the wooden red-painted Huc Bridge (The Huc, means Morning Sunlight Bridge).
Overnight in Hanoi.

By vehicle from Hanoi (city) to Halong
Cruise aboard traditional junk through Halong Bay, Day 1 of 2
Depart Hanoi for Halong Bay, en route we have a short stop for break. Transfer by tender to your comfortable junk and enjoy a welcome drink aboard. Begin your cruise through majestic Halong Bay while lunch is served. Enjoy the magical bay where thousands of sculpted limestone islands rise from the waves like dragon’s teeth. The junk continues cruising through the fishing village on the bay and pass the spectacular limestone caves dotted around the bay, soak up the sun on the top deck with optional onboard activities: sunbathing, photo shooting.In the evening the chef will prepare a splendid meal comprised of fresh seafood dishes and other traditional dishes. Overnight onboard
Overnight in cabin / onboard (Vietnam).

Cruise aboard traditional junk through Halong Bay, Day 2 of 2
Greet the day with a morning Tai Chi exercise with an opportunity to view the sunrise over the bay. After breakfast, visit a beautiful limestone grotto then back to the boat for a final glimpse of the Halong Bay while cruising back to the dock. Check out your luggage and say good bye Halong Bay.
By vehicle from Halong to Hanoi (Noi Bai Airport)
Flight from Hanoi to Hue.
Transfer
Overnight in Hue.

Excursion to Thuy Bieu village with cooking class
Around 09 am, embark on boat and start a cruise on Perfume River. Stop at Dong Ba market where you can buy necessary foods for cooking class with our chef. Visit a THIEN MU PAGODA, back to the boat for a scenic cruise to Thuy Bieu Village. Arrive in Thuy Bieu, an authentically village representing the countryside of Hue with the clear notion “garden-home”. Start the cooking class and you will prepare the lunch by yourself with the coaching given by our chef. Have lunch with dishes clients have just cooked. A nice biking or walking around the quiet Thuy Bieu village, one of villages are still kept culture of Hue. Visit the garden-home and contact with local people, past many ancestral temples as cultural features of Hue. Visit homemade incense production household and discover the life of the farmers while they are working strenuously with joys and enthusiasm. Back to our local house at Perfume River border and relaxing by steeping your foot in with medicinal herbs water -a traditional therapeutically practices. Enjoy excellent massage by blind people. End of this tour at Thuy Bieu village.
Sightseeing in Hue
Hue served as the capital of Vietnam for more than 140 years. It houses ancient temples, imperial buildings and French-style edifices. It was established in the 17th century.
Visit the Old Imperial City
Located in the heart of Hue is the IMPERIAL CITADEL, a vast complex built in the early 19th century and modeled after the Forbidden City of Peking. The original walls stretched for 10 km and were surrounded by a wide moat. Today, most of the buildings have been destroyed due to bombing during the Vietnam-American War, but the monuments that remain provide a fascinating glimpse into the court life of the Nguyen Dynasty. Approach the city past the striking FLAG TOWER, where a giant Vietnamese flag waves proudly overhead, to the imposing NGO MON GATE, the main entrance to the Imperial Enclosure. Enter into an area of spacious courtyards and serene lotus ponds, and visit DIEN THO Residence (Dien Tho palace) is where the Queen mother lived, visit THAI HOA PALACE, the magnificently decorated reception hall, the HALLS OF THE MANDARINS, and the original NINE DYNASTIC URNS, among other sites, including visit HUE ROYAL ANTIQUITIES MUSEUM.
Overnight in Hue.

Visit the Imperial Tombs of Tu Duc and Khai Dinh
Venture into the countryside around Hue to the IMPERIAL TOMB OF TU DUC. Tu Duc, the longest reigning Vietnamese emperor, designed and built this elegant tomb during his lifetime, using it as a retreat for meditation, reading and theater performances. Take some time to soak in the tranquil atmosphere, wandering among the gracefully proportioned pavilions, courtyards and lotus ponds. Afterwards visit the IMPERIAL TOMB OF KHAI DINH, dramatically located on a hillside. The last of the monumental tombs of the Nguyen dynasty, completed in 1931, this tomb incorporates distinct European elements into the traditional Vietnamese architecture.
By vehicle from Hue to Hoi An with sightseeing in Danang
Journey from Hue over scenic mountainous roads with spectacular views over the coastline. Halfway between Danang and Hue lies the dramatic HAI VAN PASS, the high dividing line between the climate zones of north and south Vietnam. Continue southwards passing LANG CO, a lovely stretch of beach curving outwards between a clear blue lagoon and the East Vietnam Sea. After arriving in DANANG, tour the CHAM MUSEUM, an elegant colonial building which now houses the finest collection of Cham sculpture in the world and briefly pass NON NUOC BEACH, a famous spot for American soldiers during the Vietnam-American War. Continue south to Hoi An, stopping enroute to visit the MARBLE MOUNTAINS, five stone hillocks, once islands, that now rise sharply from the surrounding ricefields. Riddled with caves and shrines, they are said to each represent one of the five elements of the universe.
Overnight in Hoi An.

Sightseeing in Hoi An with a boat trip on the Thu Bon River
The exquisitely preserved merchant town of HOI AN was declared a UNESCO World Heritage Site in 1999. Its colorful shophouses and temples reflect a diverse heritage, dating back to the 16th and 17th century, when it was a major port for Western, Chinese and Japanese traders. Today it is a thriving center of traditional crafts and a shoppers paradise, best explored on foot. Wander through the cobbled streets, past low tile-roofed buildings, the bustling central MARKET and the small HARBOUR where colorfully painted boats are moored. The walking tour will include visits to a PRIVATE HOUSE, where members of the same family have lived continuously for centuries in a traditional setting; to one of the FAMILY CHAPELS built by prominent merchant or official families as centers for ancestor worship; and to a typical CHINESE-STYLE PAGODA or ASSEMBLY HALL. Continue to SA HUYNH MUSEUM, located near the Japanese Covered Bridge, it contains exhibitions from the earliest period of Hoi An’s history. Visit a handicraft workshop in Hoi An where local products are being made by the industry itself. Finally, continue to the famous JAPANESE COVERED BRIDGE PAGODA, first constructed in 1593 by the Japanese community of Hoi An to link the town with the Chinese quarters across the stream.
In the afternoon, board a local boat and cruise down the THU BON RIVER, enjoying the unspoiled countryside and stopping to visit a POTTERY VILLAGE and a WOODCARVING VILLAGE before returning to Hoi An harbour.
Overnight in Hoi An.

By vehicle from Hoi An to Danang
Flight from Danang to Saigon.
Transfer
Sightseeing in Saigon
A vibrant metropolis, SAIGON teems with energy, activity and motion. Everywhere you look, you see the meeting of traditional and modern life. The emerging modern skyline stands cheek by jowl with colonial buildings and traditional temples. Outside on the streets, young professionals zip by on motorbikes, chatting on cellphones; inside the quiet temple courtyards, worshippers pray amidst clouds of incense.
Begin your tour into modern history with a tour of the REUNIFICATION PALACE. Formerly the Independence Palace of the South Vietnamese president, this 60s style building was famously stormed by tanks on April 30, 1975 signifying the fall of South Vietnam. It has been preserved in its original state, and the original tanks remain on display near the entrance gates.
Afterwards driving to the historic center to visit EMPEROR OF JADE PAGODA, one of Saigon’s most interesting pagoda. Proceed to pay a quick visit to the neo-Romanesque NOTRE DAME CATHEDRAL and the CENTRAL POST OFFICE. Pass by the classic European-style landmarks such as the ornate CITY HALL (HOTEL DE VILLE), the old OPERA HOUSE (both may only be viewed from the outside). Finally, end up at the central BEN THANH MARKET, where vendors display a vast array of goods and handicrafts, appealing to every taste.
Overnight in Saigon.